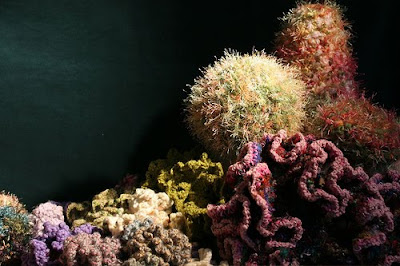 Beloved Spouse was on his way to work today, listening to XM radio (my gift to him when he bought his "Galapagos Green" Element a few years back), when he heard Margaret Wertheim's TED lecture on hyperbolic geometry and her Crocheted Coral Reef project. He sent me the link, and I spent the next few minutes getting inspired to pick up my crochet hooks again.

The project itself is fantastic, and since she mentioned Darwin's bicentennial, I decided that the Cabinet needed a post on some of the art Darwin has inspired over the years, either directly or indirectly. The opening illustration is from Wertheim's photostream on Flickr, and I hope it's okay to use it. I posted here on Darwin back in February, in honor of his birthday, but I keep happening on things related to him and thought it time for another visit with Darwin in Cyberspace--so Wertheim's amazing project offered an excuse to return to the topic.

Another notable, if not nearly so ambitious, project is Jessica Polka's wonderful Voyage of the Beagle finger puppets. She also crochets natural objects, and when I saw the TED video on the Coral Reef effort, I immediately thought of her blog, and her recent contribution to the world of Darwiniana.

Last spring I started reading Robert Charles Wilson's 1998 novel, Darwinia, but had to stop because it was a bit too intense for someone on the threshold of heart surgery. I finally finished it this summer (and went on to read The Harvest and Mysterium) and recommend it enthusiastically. It combines some of my favorite elements of speculative fiction: true alienness and good science. His stories frequently involve dei ex machina that spark the fictional equivalent of punctuated equilibrium, forcing characters to adapt precipitously to new situations.

While I was looking for a link to Wilson's book, I came across a game by the same name, which might be interesting if you're a video gamer. This one looks mildly entertaining (at least as much fun as shooting down snaking lines of scarabs, which is what I do in my off moments), although only marginally involved with Darwinian processes; it does, however, seem to resemble Wilson's scenarios in the sense of requiring a kind of evolve-on-a-dime-or-die situation.

Yet another contribution to the cabinet of Darwinian curiosities, combining media arts, science, and literature, is the amazing new addition to English Heritage's website devoted to Down House, Darwin's home: "Explore the manuscripts" includes entire virtual copies of four of Darwin's field notebooks, plus highlights from the Beagle voyage notes. I posted about the software that makes this possible yesterday on the Owl of Athena, but wanted to mention the site here, because the ability to view these notebooks in as much detail as the "Turning the Pages" application allows is just priceless for Darwin devotees.

If I haven't already mentioned this, I'm remiss--but the Darwin Online site provides the texts of everything he published, plus a list of supplementary works that include Emma Darwin's Recipe Book (with the recipe for boiling rice in her husband's hand). The technology isn't as sexy as Turning the Pages, but it still makes it possible to read exactly what Darwin wrote.

Finally, I'd like to mention a treat I bought myself when I had a 40% off one item coupon at Borders: The Beagle Letters, edited by Frederick Burkhardt--a marvellous volume illustrated with watercolor sketches and pencil drawings by Conrad Martens, who was for a time Darwin's fellow passenger. The book's publication is a product of the Darwin Correspondence Project, another noteworthy effort to get Darwin's works online--this one focusing on the full texts of more than 5000 letters.

Although I'm not a great fan of biographies, I love to read other people's mail, at least when the correspondence is as lively and as interesting as Darwin's. One gets a better sense of the person in a letter, and since nobody much writes them anymore, epistolary insights into the characters of great writers and scientists may be fewer in the future.

Before the year is out I expect I'll come across more to add to this list, but I do have to get back to work. As the rain drips off of every surface outside my window, though, sifting through the web for things Darwinian provides a nice respite from gloom and chill.

Image credit: Hyperbolic crochet corals and anemones with sea slug by Marianne Midelburg. Photo © The Institute For Figuring (by Alyssa Gorelick). Downloaded from Margaret Wertheim's Photostream on Flickr.
Posted by Owlfarmer at 12:05 PM

Hi, I like your blog. You probably know about letters of note. You like correspondence so check it out if you haven't already. It's really interesting. Would you like to take a look at my work on www.thecleanwhitepage.com?

Hi Candace -- thanks for dropping by MoD and, in so doing, reminding me about your wonderful blogs... This post is strangely synchronous for me as we were talking about Wertheim at dinner with friends the other night (one of them used to date her), and looked at her TED talk... she's a great performer! And the reef is a lovely project.

Btw I edit an academic journal in my off-line life (well it IS an online journal, but you know what I mean), and I was wondering whether you would be interested in reviewing the 'Turning the Pages' app for my February 2010 issue? This issue is actually devoted to the proceedings from the Super Human symposium, which is a Darwin celebration event. Anyway the journal, Second nature, can be found at http://secondnature.rmit.edu.au -- you will find my work email on the site, or mail me through MoD http://museumofdust.blogspot.com if you're interested.

Also I thought that you might be interested in another of my projects, an online 'social museum' at http://curiositycabi.net -- Curiosity Cabinet is currently in alpha aand we'll be releasing the beta version in early december. (Please forgive me if I've already pestered you about this one ;-)