A Brief History of the Heart: In Pictures 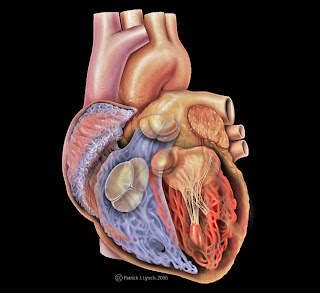 As I mentioned over on the Farm, I've been looking up images of the heart in conjunction with my current preoccupation with impending surgery (not until March, I hope). For someone interested in the visual arts in general, and design in particular, the history of ways in which human beings have imagined the heart visually offers a fascinating journey into imagination and understanding.

Metaphor-makers that we are, human beings have to understand new concepts in terms of what they already know. I remember a history of science professor once telling us that the real breakthrough in modern understanding of heart function didn't occur until the hydraulic pump was invented, because until then we had no way to envision what was going on. I'm not entirely convinced that this is the case, since William Harvey's understanding of the pumping action of the heart was in place by the early seventeenth century, and the hydraulic ram is an eighteenth-century invention; ideas about pumping in general had also been around since the Middle Ages. But the popular understanding of the relationship between the heart and the pulse must certainly been made clearer to the general public after sophisticated pumping devices became more commonplace.

There are several terrific websites available on the heart and the history of what we know about it (one of the best is the PBS program, The Mysterious Human Heart; see also the Franklin Institute's online exhibit, The Human Heart). But most histories start with Harvey, and the more intriguing ideas are those that preceded our modern notions. 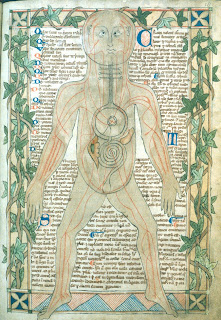 Take, for example, this illuminated drawing of the circulatory system from a thirteenth-century medical miscellany (Oxford). I show this to my art and design history students as an example of Medieval secular manuscripts, and they hoot over the goofiness of it. But if that little circle in the middle of the chest is supposed to be the heart, it's clear that the illustrator had some notion of the relationship between heart and veins. If it simply acknowledges the connections between vessels and the heart, without really understanding how it all worked, it's still interesting that folks were poking around in bodies trying to figure out what exactly was going on.

Or consider this Persian image, from The Medicine of Akbar (via the National Library of Medicine's Historical Anatomies site), which suggests a similar view of the heart and the veins. 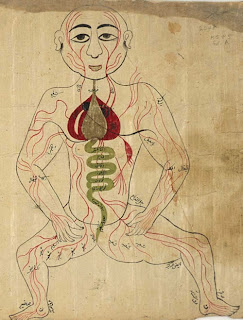 The "anatomical squat" as I like to call it is a common pose in early medical documents. Sometimes annotations and rubrications can be entertaining, because they describe (in languages I don't read) what's going on in the drawings, at both ends of the digestive system, and are frequently placed in amusing contexts. What's clear, though, is that the image of the heart with which we're familiar today isn't intuitively obvious.

As printing and graphic arts burgeoned beginning in the sixteenth century, lovely illustrations appeared in anatomical treatises, such as this woodcut from Anatomiae, by Johann Drylander, published in 1537 (from the University of Toronto's Anatomia, an exhibit of prints from the Thomas Fisher Library). The catalogue description indicates that even if functions weren't completely fathomable, the artist could still depict what he saw. 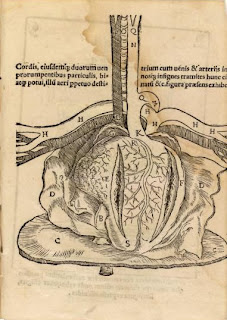 As much as I admire what earlier illustrators accomplished, I can't help but think that living in this particular technological moment has its rewards. For one, digital imaging machines and programs of all varieties are making it possible not only to explore the physiology of the heart in ways that the early theorists couldn't imagine, but to use these technologies to fix what ails us. Some of what's produced is quite beautiful: 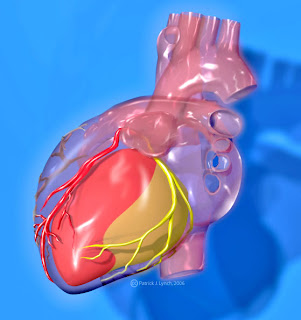 This particular image (as well as the one used to open this post), by medical illustrator Patrick Lynch (available from Wikimedia Commons; his medical illustration portfolio is on his website) shows just how lovely instructional media can be thanks to the new technological tools available to talented artists. And as much as I appreciate the efforts of the early physicians, I'm thankful to live in a time when the visual arts, married to advances in medicine, can provide us with the technology and expertise to repair hearts that don't work.
Posted by Owlfarmer at 10:32 AM 1 comment: 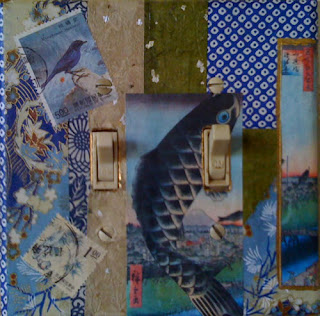 Once in a great while I wax creative with stuff I've collected over the years: odd images, bits of paper, stamps, and other ephemera. As an unabashed fan of the pioneers of collage and papier collé (Picasso and Braque) as well as of their heirs (Joseph Cornell, Nick Bantock, and others), I occasionally dabble in the practice of sticking things onto other things.

Some of the best imaginable "canvases" for such an endeavor are the cheesy blank plastic plates generally used to surround light switches and power outlets in our homes. Since I can't really throw anything away without a damned good reason, and am appalled by the prices some sources ask for more artful examples, I took it upon myself a couple of years ago to decorate my own. The first couple were usable, but not exactly awe-inspiring. I finally perfected the technique to my own satisfaction, however: first paint the plate with flat acrylic, and when it's dry begin to apply the desired bits with decoupage gel and a paintbrush. After that's dry, add metallic paint or leaf, or a stamped image or two, and then coat with another layer of gel. They turn out nicely and are pretty indestructible once coated.

All of mine so far are created from origami papers, kimono wrapping paper, washi, postage stamps from Asia, newspaper, fabric, photos, images from Dover design books and other bits of Japonisme or Chinoiserie I've come across over the years--even my mother's signature "chop." I grew up in Japan and Taiwan, and (because I hoard material evidence of my past experiences--it's a genetic defect and probably also has something to do with my archaeological training) have collected myriad boxes of things that can be used for collages on small surfaces.

I once made a couple of Impressionist examples for a mother-in-law as a Christmas gift by simply applying note cards cut out to fit blank wooden plates, and used gold paint on the edges. They looked like a million bucks--but also like something you'd buy in a hobby store. The collage versions are much more personal, and offer me a connection with my past every time I turn on a light or plug in the toaster.

As we've been working on the house and making rooms more habitable, I've been adding the plates as a finishing touch. It's just plain fun to do, and a nice way to work of tensions that can't be eased by gardening this time of year. The materials are ready-to-hand, cheap to acquire, and simple to use, providing the perfect sort of art therapy one might need around the holidays. They make nice gifts, too, especially if you spring for the wooden versions. Nick Bantock I ain't, but I have nice switchplates nonetheless. The iPhone images don't exactly do them justice--but provide a general idea of the results.
Posted by Owlfarmer at 9:36 AM 2 comments: