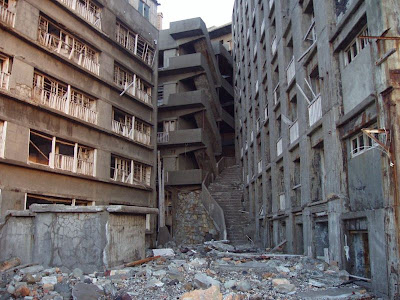 Those of us who are enamored of Wunderkammern often seem to find ourselves drifting--either physically or virtually--into ghost towns and other abandoned spaces. I think my own interest must stem from the archaeologist in me, because I'm equally drawn to unearthed remains from past civilizations--particularly three-dimensional sites like Chaco Canyon, the Labyrinth at Knossos, and the ruins of Pompeii and Herculaneum.

I began musing on this topic late last year,* when I picked up a book on sale at the Dallas Museum of Art. It was in Japanese, with very little information in English, so I ended up doing an internet search on Gunkanjima Island, an artificial construction on a small reef off the coast of Japan. Gunkanjima, or Battleship Island (because that's what it looks like from a distance) had arisen in the coal-mining heydey of the nineteenth century, was built up over the next century and a half, and then finally abandoned in 1974.

The book first attracted me because it's about a place in Japan I'd never seen--nor had I (at least consciously) ever heard about it--but it had the mysterious aura of a ghost town, or a place devastated by some Chernobyl-like event (something that's haunted me since talk of a neutron bomb). The photographs are stark and beautiful, in black and white, and seem almost like museum reconstructions of an apocalypse. Here is visual proof of what goes on after we're gone--as recently portrayed in Alan Weisman's The World Without Us.

The web search led me to BLDGBLOG, and the post I found turns out to have been Geoff Manaugh's first on his more-or-less-focused-on-architecture pages. He's since gone on to myriad other fascinating places, and it'll take me a good while to plumb them all. That is, if I don't get lost looking at all the interesting stuff he sends one off to, including BLDGBLOG's sister site, Edible Geography, now linked on the Cabinet's "Wunderkammern: Food" section.

The General Web Directory Journal's pages on Abandoned Places In the World list articles on Gunkanjima and other spots, including one in Taiwan that was built and abandoned after I left. It's not a proper blog, and its home site is more of a clearing house for web information, but I was happy to find it nonetheless.

Of the many web places that deal with San Zhi, the "UFO pod village" originally designed to serve as a tourist trap in a relatively neglected area of Taiwan, Carrie Kellenberger's post on her My Several Worlds blog has the best pictures. She's a Canadian ex-pat living in Taiwan (much like my mother did for most of her life), and manages to transport us to the site through her photos. The place was built while my mother was living in Taipei, so I guess I could expect to find pictures of it among the thousands she left behind for me to sort through. One of these days. At any rate, mystery endures because construction was abandoned due to fatal accidents (or not) and rumors have hinted at nefarious deeds, resulting in another Asian take on the ghost town idea. 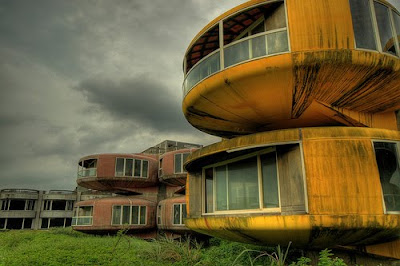 In my more recent travels I discovered a plan to tear it down, which seems to have come to fruition according to this story in the Taipei Times and more recent photos. Demolition apparently began shortly after I started writing about it. (Hear the Twilight Zone theme now, please.) 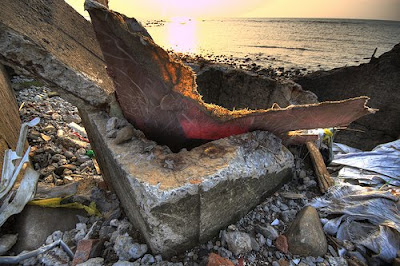 My fascination with places like these actually began in Taiwan, even though I left a decade before the San Zhi pods were built. Above one of the many houses we occupied in the five or so years I lived there sat a small abandoned house that my brother and I managed to sneak into a couple of times. The place was tiny--only three rooms that I can remember--and may have been a remnant of the Japanese occupation, like many of the homes we rented (all five had at least some Japanese features). My curiosity wasn't confined to Taiwan, however. Whenever I visited my grandparents in the Owens Valley, I would peek into the windows of the empty Department of Water and Power bungalows, since they were seldom occupied when I was there. Empty spaces leave room for growing imaginations.

The latest issue of Orion Magazine plays into all this with an article on Deyrolle, a Parisian taxidermy store that caught fire in 2008. Martin D'Orgeval's story ("Touched By Fire") and photos evoke the same, almost mythic quality that inhabits old, stuffy museums and ghost towns. It's not online yet, but may be later (Orion tends to parcel out its web access between issues). Two of the pictures are, however, available on Jessica Palmer's Bioephemera blog post, Beautiful Decay: Three Collections. The store, which has since reopened, has its own website (in French). The New York Times ran an article, Rescuing Deyrolle, a beloved Parisian Shop, not long after the fire. This is another of those places I most certainly would have visited, had I known about it--even in the diminished state of youth some forty years ago, the last time I saw Paris.

The web is chockablock with blog entries and photo collections of lost places and fascinating collections of odd things. Not at all a bad way to spend a Saturday afternoon.

*While this post was begun last Christmas, it was abandoned, then taken up again and completed on 23 January, 2010. I think there's a metaphor here.

Image credits: The opening photo was taken by a Japanese user and posted to Wikimedia Commons. He/she also has a page of photos of the island. Unfortunately, I don't read Japanese, so I can't name the photographer. The shots of San Zhi (Sanjhih) are from Cypherone's Flickr photostream.
Posted by Owlfarmer at 10:03 AM 5 comments: