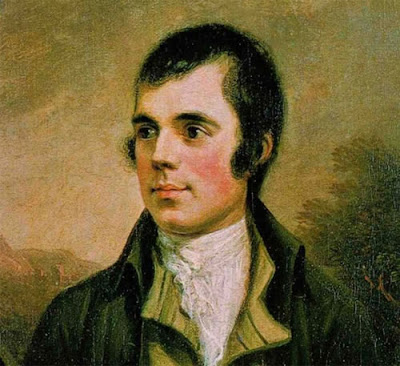 Everyone with a wee dram of Scots blood in 'em should be throwing a party today--a Burns Supper--to celebrate the 250th anniversary of the most celebrated figure in Scottish history. I mean celebrated in the more literal sense--rather than simply in the "celebrity" sense. Probably Mary, Queen of Scots, or even Gordon Brown (or for that matter Sean Connery) are more written about and discussed these days. But every year, all over the world, proud fans of the poet celebrate his birth with single malt and toddy and haggis* and a great deal of pompous recitation of his works, ending with a rousing chorus of Auld Lang Syne.

Well, mostly. I, for one, leave out the haggis*--although I have been known to make oatmeal (thanks to the Slow Cook blog for the article) for breakfast to mark the day. And to be honest, I've only actually ever attended a few Burns Suppers in my life (primarily in my years at Penn, where such traditions were held dear amongst my friends). But this year's special, so I thought I'd mark it, in honor of the attachment of one man to one place, and the enjoyment anyone with a connection to that place feels on such an occasion.

Although many folk of Scottish descent claim relation to Burns, probably the only way I could would be if he'd had children with his great love, Highland Mary (Campbell), since I've got both Campbell and MacDonald blood flowin' in my very veins. I have mentioned, have I not, that my great grandfather's name was Angus Campbell McDonald? But, alas, there was apparently no issue from this union--however consecrated, or not, it might have been. And my relation to Burns is thus merely that of a devotee.

One of the best sources of cool stuff related to Burns (or Burruns, as my Glaswegian friend Victor pronounces it) is the online Future Museum that provides access to collections from south-west Scotland museums. Their Burns artifacts are all absolutely fascinating, from the ordinary to the sublime. I urge a visit to peruse everything from pipes to manuscripts to whiskey bottles, like the one at left, which was produced in 1896 to commemorate the centenary of Burns's death.

Seldom have I had as much fun noodling around a virtual space. Thanks to the staff for providing such a valuable and entertaining resource.

And so, in parting, a bit of my favorite poem of all, untranslated and with its wit intact, "To A Mouse" (the link is to a study guide):

Wee, sleekit, cowrin, tim'rous beastie,
O, what a panic's in thy breastie!
Thou need na start awa sae hasty
Wi bickering brattle!
I wad be laith to rin an' chase thee,
Wi' murdering pattle.
I think of this poem every time a member of my menagerie goes after a cotton rat.

Should one feel the need for further celebration, here are some Burnsian links:

Scottish Gemini's Worldwide Toast To Robert Burns site, where you can donate a pound to help preserve the Burns birthplace in Alloway. The page has a history of Burns Night, complete with a picture (which is as close as I want to get) of a haggis.*

The self-proclaimed official Robert Burns website, Burns Country, with a page of instructions on how to throw your own Burns Supper (there's still time!). I'd do one my own self sometime, if I could just get past the haggis.*

*Haggis: Traditional Scottish dish consisting of a sheep's stomach stuffed with oatmeal and all manner of other ingredients. It's actually admirable in that it represents the consummate example of not wasting anything, and may account for the reputation of Scots as "thrifty."

Google video results for "haggis" (some videos not for the squeamish) including one of a recitation of Burns's poem, "To A Haggis."

Haggis Recipes from (of all places) the Gumbo Pages (stands to reason, though; Gumbo's an example of food frugality as well--and Lord knows New Orlean's has been through some tough times of late).

Here's hoping that folk will still be raising glasses and eating haggis in Burns's honor 250 years from now.

Image source: the portrait (by whom they don't say) is from the Wikipedia article on Burns.
Posted by Owlfarmer at 9:01 AM No comments: