Of Cats and Caravans

One of my Big Plans after I retired was to get back into the habit of blogging--not so much because I'm aware of any large fan base who might be missing my witty takes on recent events, but rather because it's a way of keeping my brain from turning into mush. Not having to update course material, keep on top of new and interesting happenings in the art world, and find new and engaging ways of trying to enlighten my increasingly less interested students holds the very real possibility of my losing myself in house porn of the escape-from-Texas variety. Writing is one way to maintain my sanity, and to ensure that not everything we do descends into the fog of fleeting, aged memory. 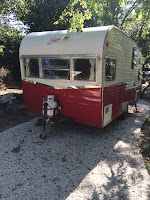 Since the end of the Spring term last year, when I forever severed my ties with the for-profit academic world,  I've managed to find more to do than I'd ever imagined.  Not many of the projects have been completed, but many (such as filling up the family tree on Ancestry with as much information as I can locate, and providing photos to accompany names) are well underway.  And in addition to enjoying last summer essentially goofing off with the Beloved Spouse, I got to enjoy the more recent winter holiday in its entirety without having to rush back to work on January 2. Alas, he returns to teaching tomorrow, but when he's finished with the Spring semester, we hope to be heading west in our little fake Shasta Airflyte (2015 reproduction) to visit relatives and my ancestral homeland of Owens Valley, California.

On the way, we mean to do a bit of scouting for new digs in New Mexico and Arizona, or even somewhere near the old homestead in Lone Pine. With the trip in mind, we've been taking care of recall issues with the Shasta, and have been spiffing her (tentatively called "Lola," but also more recently referred to as "The Folly") up with a comfy new mattress and a bit of vintage trailer decor. We're trying not to get too cute about it all, but did put new "baby moon" hubcaps to make up for the absence of the whitewall tires it came with. We got new tires before we had a problematic axle replaced, but kept them because they ride better than the originals.  We've opted to keep the bed made up permanently, rather than keeping the dinette in place, figuring that most places we camp will have a picnic table, and we're on the lookout for a couple of '50s era TV trays.  A two-inch memory foam mattress makes for a much more comfortable sleeping experience, so we'll keep it made up for now. 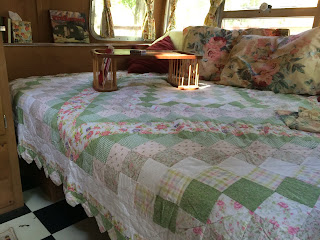 Last week, during the teeter-tottering weather cycle that moved us from balmy to frigid and back again within less than a week, I decided to spend the afternoon reading my favorite British shelter publication on my iPad whilst enjoying the pleasant weather and a glass of Kombucha.  I was a bit surprised when my cat Emma decided to join me. She's not the most companionable of cats, and not really an out-door feline (she loves it out, but only gets her way when I can keep an eye on her), but I hadn't even quite settled onto the bed when she hopped up and lay down next to me. 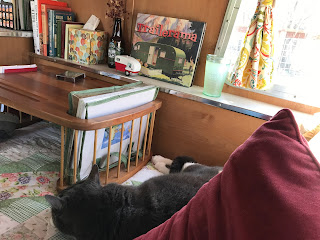 It wasn't long before the sun started warming her up more than she apparently wanted to be warmed, so she moved over to the other side and proceeded to look more comfortable than any being should be allowed to look. 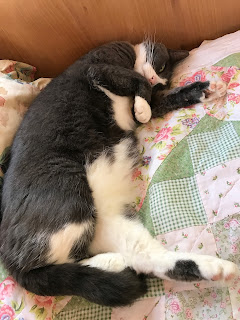 After a good long snooze, she decided to see what was going on outside, and perched on the edge of the bed, exposing her broad side. 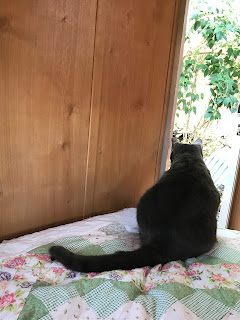 She soon decided to abandon me, but not completely. For quite some time she surveyed her domain from the cedar porch the Beloved Spouse made (to make it easier for the dog to get in and out), and which has become one of her favorite spaces.

All of this cuteness is somewhat unusual for Emma (also known as Mrs. Peel). I adopted her when her former person opted to give up the cat to marry an allergic husband.  Originally a Hurricane Katrina survivor, Emma is tough and opinionated, and not particularly affectionate--unless she wants something. Like being let out. But she did help us solve our mouse problem last spring, and since our dog Woody died last summer, she serves as a some-time companion to Arlo when he's outside. He would like to be friends, but she's too aloof to be chummy. Tolerating his presence is about as good as it gets.

I don't mean to go on about cats (and no, I am not becoming a crazy old cat lady!), but I'm usually so grumpy myself (especially over on Owl's Farm) that I thought I'd post something mildly amusing to help me get through this week. January 20 is coming far too quickly, and this little bit of escapism seems well placed.

Addendum: Our sanguinity was somewhat disturbed a couple of days ago, when--during another spell of reading in the trailer--the rear window (opened to enjoy the warm afternoon) abruptly shattered and fell onto the gravel driveway that my husband had so carefully constructed last summer. This particular window was one of the aforementioned recall issues, and we weren't the first to experience the problem. But this was supposed to have been fixed. We're not sure quite what to do, but it looks as though we'll take matters into our own hands and replace the glass (as we've done temporarily) with plastic, a solution others seem to have used successfully.   Sigh.
Posted by Owlfarmer at 1:07 PM 1 comment: