A Celebration of Darwiniana 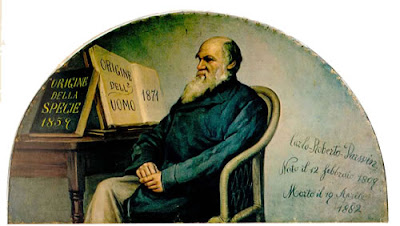 Charles Darwin was a kind of human glacier, moving slowly through human scientific life, raising lateral moraines alongside the flow, scooping up ideas along the way and pushing them ahead, leaving the occasional drumlin. I could go on with this silly metaphor (if you don't know what I'm talking about, see this page on glacial terminology), but I'm a fan of Pleistocene geology and once had to memorize all this stuff. It is kind of apt, though, even though it's not biological.

In the accumulation zone, the cirque, lies Darwin's birth in Shropshire, England, on 12 February 1809. It includes the Beagle and Edinburgh University and Cambridge and Down House, where Darwin did most of his work. The glacier itself, flowing forth over the intellectual landscape, incorporating some ideas, grinding others down, consists of everything that's happened since. It includes all the controversies, the affirmations, and the ancillary work by more-or-less contemporaries like Gregor Mendel and Ernst Haeckel, and modern biologists like E. O. Wilson, Ernst Mayr, and Stephen Jay Gould. He influenced more theologically oriented thinkers like the philosopher Henri Bergson and priest-paleontologist Teilhard de Chardin, and has remained a controversial figure among other religious folks less capable of reconciling doctrine with scientific evidence.

What's really astonishing about Darwin is how well his original ideas hold up, despite the fact that there was, at the time, no inkling of biology to come: RNA, DNA, the double helix, gene transfer, punctuated equilibrium. Everything that gets done in modern biology starts in Darwin's cirque and flows outward. The beauty of science is that it changes, builds--evolves--and grows as people explore ideas. Theory is about good answers based on good evidence: the best picture we can draw from what we know at the moment. But the power of Darwin's model, even though challenged over and over again, has stood its ground and provided us with a basis on which to enlarge our picture of the world. Even recent news about the shape of Darwin's tree isn't a negation; it's an affirmation that the guy had it fundamentally right, two hundred years ago.

This post, to celebrate this momentous birthday, is a wunderkammer of cool stuff related to Darwin and available on the web. I only have a couple of hours to work on this today, so I can't pore through the vast amount of information that exists. But here are some good links to blogs and websites to begin your celebration, followed by my choices of favorite images of Darwiniana:

Larry Moran's blog, Sandwalk: Strolling with a Skeptical Biochemist. Moran is a Professor in the Department of Biochemistry at the University of Toronto.

The Biologista's tribute to Darwin

Pharyngula's Happy Darwin Day post. P.Z. Myers is a biologist and an Associate Professor at the University of Minnesota, Morris

Darwin's Canopy: Art Inspired by Evolution, from the New Scientist online. The site also has a feature on Darwin's impact: Darwin 200. The site's blog, Short Sharp Science, even includes a post by Australasian Editor, Rachel Nowak, called Eating my way through four billion years of evolution.

And now for some pictures: 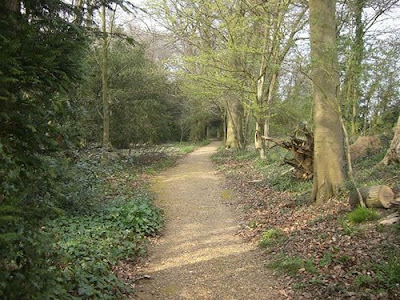 Darwin's Thinking Path, also known as the Sand Walk--where he would walk and muse; would that we all had such a place to do our thinking. 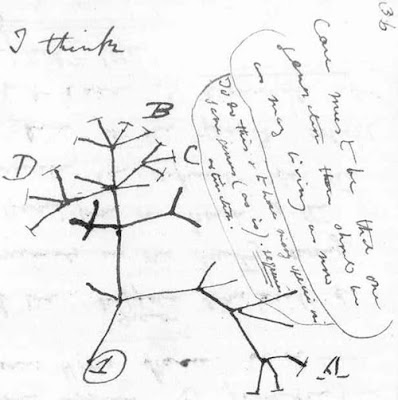 Darwin's first "tree of life." It's a testament to scientific uncertainty (and its lack of belief in religious terms) that he writes "I think" at the top. That's just it: scientists think. 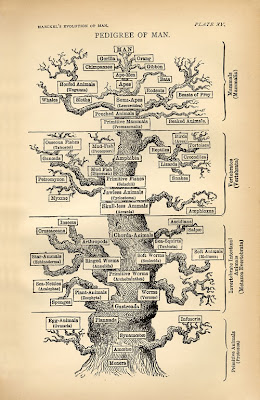 Ernst Haeckel's "Pedigree of Man" based on Darwin's description in The Origin of Species. The Opening pages of the 1859 first edition of Origin appear below (the link above is to the 6th edition, which corrects mistakes from earlier ones): 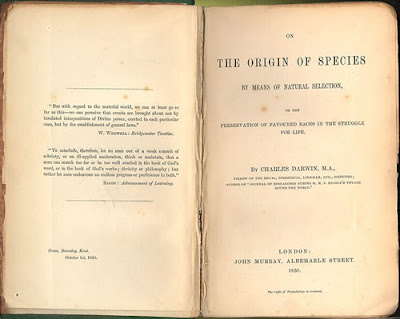 Darwin's finches, discovered on various of the Galapagos Islands, each with beaks and other anatomical features adapted to its peculiar circumstances, helped his ideas coalesce into coherent theory: 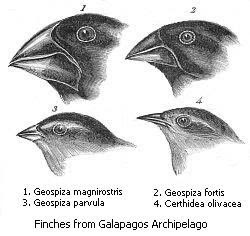 Here's a plan and cross-section of the ship, HMS Beagle, on which Darwin sailed into history:

There are more pictures where these came from, and myriad editions of the book. Read it if you haven't already; there's even an illustrated version with nice pictures--and the readability of the text still amazes me. The good thing about not having a huge pre-existing vocabulary from which to draw is that Darwin had to write in language everyone could understand. We no longer commonly have as many words in our everyday vocabulary--but at least you won't need a scientific dictionary.

Happy birthday, Mr. Darwin. And thanks for all the fish.

Image credits: all images on the page are from the Wikipedia article on Darwin, the Beagle, on Darwin's Tree of Life, or from Wikimedia Commons.
Posted by Owlfarmer at 6:56 AM 2 comments: