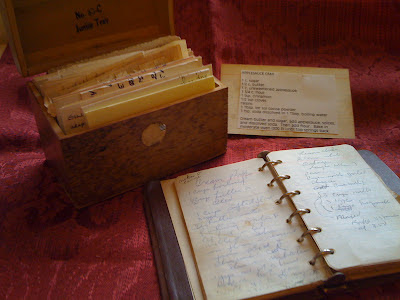 In some ways, this post (and the ones that follow on this topic) should be called "Great-Grandma Esther's Recipes" because my grandmother attributed most of what she made that we loved to her own mother. But the little notebook of recipes I have the privilege of owning is written in Grandma Clarice's almost-illegible handwriting, or pecked out on one of her series of old-timey typewriters. A couple of the recipes are written out in my pre-adult hand, probably while I was living with her during my Freshman year in high school.

Not included in the book, however, are instructions for favorite foods such as applesauce cake and "home-made noodles." The only reason I have these is because she dictated them to me so I could add them to my little recipe box. As she cooked, I wrote down what she was doing, and so my archival inclinations came in handy. Some day when I've got more time, I mean to scan the scribbled notes she made about food she'd had at friends' pinochle parties, and make a book of them (with translations, since I'm one of the few people alive who can actually read her handwriting), along with the family favorites, for my cousins and their children. But in the meantime, at the risk of taking my Uncle Art on yet another teary-eyed journey, here is her recipe for Applesauce Cake (as dictated to me):

Now, the real essence of this cake--Gram's abilty to throw it all together and add whatever she wanted to (raisins, for example--and often walnuts) in whatever amounts she wanted to--is missing from my version. It's not that I'm any more precise, but I haven't been able to use white flour in quite a while, and I have to cut some of the saturated fat down by using half butter and half canola oil. So my interpretation tends to be heavier.

She also used to double her recipe (which fits into an 8 x 8 inch pan) and bake it in a 9 x 13 pan to feed a crowd. I still double it, but put it into two smaller pans, and am going to start freezing one every time I bake it. As I mentioned in today's Farm blog, it's one of my strategies to help fight homesickness and avoid pie cravings. My sweet tooth is decidedly smaller than it once was.

For folks who are concerned with fat content and/or glycemic indices, here's my modified version. It's still pretty good, but it's not Gram's:

Add to creamed mixture:
1 c. unsweetened natural applesauce
Stir in:
1 3/4 c. whole wheat flour (I use white whole wheat; another alternative is to mix unbleached and whole wheat half and half)
1 tsp. cinnamon
1/2 tsp. cloves or allspice (or both)
about 1 cup raisins
about 1 cup toasted pecans or walnuts
1/4 to 1/2 c. Dutch-process cocoa powder
1 tsp. soda dissolved in 1 Tablespoon boiling water.

This is a pretty forgiving cake. It's potentially vegan (if you leave out the butter), and there's no salt in the recipe. If you add a little (half a teaspoon) you'll get a lighter result.

This cake is best warm, soon out of the oven. A little butter makes it a luxurious treat. It's also great for breakfast or with an afternoon cuppa.

Now, if you'll excuse me, my cakes are ready to come out of the oven, and I'm off to indulge in a bit of nostalgic munching.
Posted by Owlfarmer at 12:33 PM

I am so glad you posted this recipe! My husband always talks of this great applesauce cake that his Granny made. I think I will surprise him with this.

Good morning, I stumbled on your blog quite by accident and enjoying it very much. The photo of recipe cards and book caught my eye. Very much like my Mom and Grandma used to keep recipes.

Brings back lots of memories. Mom was a wonderful cook.

Thanks for taking me back a few years and thanks for the applesauce cake recipe.
Marnie

Thanks to you both. I'm planning to include more of these in future, mostly because it makes my dear, sweet uncle Art get all misty eyed. We have many of the same memories about my grandmother's table, but he always manages to add his own to the mix and enrich the stew.

Thank you for putting such wonderful family memories into words. I asked Dad about the applesauce cake recipe just last night and he sent me here. I remember always asking Grandma to bring applesauce cake to the Red Rock Canyon get togethers and she did. take care,
Wendy

It's great to hear from you, Cuz. Your Dad is a frequent inspiration here and on the Farm. I'm still planning to put more recipes up, but will (eventually) get them all transcribed and printed up into a nice little book for all the cousins, their kids, and grandkids (as well as the Patriarch himself and your mom).