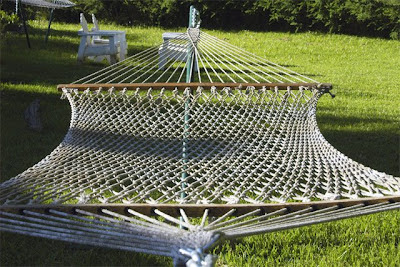 One thing always seems to lead to another, and its this serendipity factor that I enjoy most about living in the rarefied aether of the blogosphere.

Today, for example, I had no intention of posting here in the Cabinet. But I wanted to touch base with some of the blogs I frequent (I don't have automatic feeds to any of them, because there's already too much stuff to attend to in the various e-mail accounts), and went first to Serenity Now, another web Wunderkammer that originates not all that far north of me. Christie has been talking about fireflies and what to do with roosters, and after I'd posted comments I did what I often do: glanced at other commenter's blogs.

There I discovered Sweet Repose, where "lives" a retired Iowa antiques dealer who had recently posted on chamber pots. After leaving a small reminiscence there, I started musing on the blog's title, and this old gal's mind wandered to--Wallace Stegner's Pulitzer Prize-winning novel, Angle of Repose, which I read last summer, not long after having re-read the late Ellen Meloy's The Anthropology of Turquoise. Meloy was a long-time Stegner fan, and all three of us share California connections--although mine involves a different side of the Sierras than either of theirs do. Meloy died young, but not before writing several really evocative books about western wilderness. Stegner, during his stint as the director of Stanford's creative writing program, influenced the likes of Wendell Berry, Edward Abbey, Ken Kesey, and Larry McMurtry. For more of my take on related topics, see my Owl's Farm post from last year, "Writing the Desert."

I should mention that I'm not reading much fiction these days (except for good hard science fiction), but I became so absorbed in Stegner's book that I ended up doing a bit of research on the inspiration for the novel: the life and work of Mary Hallock Foote. There's a nice profile of Stegner on the California Association of Teachers of English site, and it succinctly describes the controversy that arose over Stegner's use (with the permission of her granddaughter) of Foote's letters as the basis for his novel. Although fiction, the accounts of Susan Burlington Ward's experiences as a turn-of-the-century eastern Quaker in the American west (grounded as they are in Foote's actual life) resonate with what my grandmother described about living in California's Owens River Valley in the early twentieth century. At any rate, what emerges from the confluence of the novel and what I learned about Foote is further confirmation that other people's lives overlap in unexpected ways to enrich our own when we're paying attention.

Were my grandmother and my father still alive, the books I list below would have been taken home during my then-annual pilgrimages back to the valley and offered up enthusiastically on the family literary altar for reading and later conversation.

In their memory, my Summer Reading Recommendations, for anyone interested in topics like desert ecology and life, the history of mining in the West, the history of California, Victorian women in the west, and some damned good writing, are as follows:

I hope you've got a good hammock in your back yard, and a large supply of cold-brewed iced tea.

Photo: A Hammock, by Dennis Mojado. Wikimedia Commons
Posted by Owlfarmer at 8:07 AM

Hammock! That's what I need. Thanks for the book recommendations.