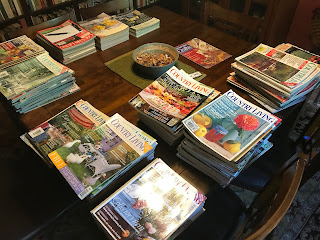 As a result my infrequent, and generally unsuccessful attempts to jumpstart this blog, ideas about potential post topics flit through this old brain like so many bits of paper in a tornado. But I have been thinking lately about the whole process of organizing one's life so that one can, as one ages, make some sense of it. I even got a book for the Kindle app on my iPad to inspire me: Margareta Rasmussen's The Gentle Art of Swedish Death Cleaning (Scribner, 2018). The whole thing is far less morbid than one might expect, and because I'm a natural born snark I love mentioning it to people, and offending their delicate sensibilities.

The truth is, that I'm genetically predisposed to be a gatherer. My mother's name was Hoard, after all, and she lived up to it. And I'm still facing the prospect of going through yet more of her stuff next week as we finally tackle The Great Garage Clean Out. The poor woman has been dead for twenty years and I'm still doing her death cleaning.

Having decided not to put my children through this, I've started tackling small tasks that can help me sort things out in an organized way, and even if my kids don't want to keep my stuff, at least it will be more or less catalogued so that they might be able to fob it off on somebody who actually wants it.

Take my vast collection of past issues of the British Edition of Country Living magazine. My poor husband has been hauling this stash (well, at least the pre-2000 collection; it was mixed in with a complete collection of Martha Stewart Living, until I finally went through those and recycled 90% of the content) every time we've moved since 1988. The first issue I own was bought in London in 1987, and I've been an irregular purchaser ever since. Since 2013 I've subscribed electronically through Zinio, but before then I had amassed 181 issues, including twelve issues of Countryside, an American knockoff that only lasted a couple of years, and to which I subscribed in Chicago until it stopped publication--about four issues after I'd sent in the check.

Now why, you might ask, would an old desert rat, exiled in north Texas, hold such affection for a British shelter magazine when there are more than enough locally relevant publications around here (also available as e-zines these days) to keep any homebody happy. Well there are quite a few, and I subscribe to a number of them, but even those tend to be published in Australia or Canada rather than in the USA, unless they're like Eating Well or holdovers from my hippie days like Mother Earth News and centered on sustainable eating and living.

The thing about Country Living UK, however, is that it has always been focused on stuff I'm a sucker for: rustic design, sustainability, smallholding, countryside, Aga (and other) ranges, Smeg refrigerators, and old creaky houses with personality and a need for TLC.

I once had a dear friend from the Hampshire city of Portsmouth, who thought I was completely bonkers because I had this bizarre (to her) sense of style and taste that meshed far more with the Country Living aesthetic than did her own. She died some years ago, but she would be equally dismayed by my loyalty to the BBC show, "Escape to the Country," watched loyally by the Beloved Spouse and me whenever we can find an episode on YouTube we haven't yet seen.

In my own defense, I have to say that I come by this proclivity genetically. The results of my Ancestry DNA test showed me to be far more British than anything. A smidgen of German and Dutch, but all the rest English, Irish, Scottish and maybe a little Welsh. Even the tad of Scandinavian that showed up in the first go-round (as more data comes in, the picture becomes clearer) has disappeared. (There was a short article in the last update with advice on how to get one's Viking tattoo removed.) And all those Brits mostly went to Canada before they moved south and west, so there's no escaping the Commonwealth.

I'm still trying to locate the origins of some of the ancestors, but have no great urge to find any lost royalty or famous folk. But since they all seem to be from villages rather than cities, I suppose that accounts for my affection for open spaces (although not too heavily treed), and for windy wastes and Thomas Hardy novels.

So today I managed to locate all of the old issues scattered about in bins and cubbies around the house, and have divided them roughly into seasons (Jan-Mar, Apr-Jun, Jul-Sep, Oct-Dec) and will rotate them in appropriate stacks onto the bottom shelf of the stand next to my comfy chair where I can re-enjoy them seasonally and perhaps get inspired to do something other than pine away for the lochs and firths.

My last post extolled the virtues of curatorial apps, and my adventures on Pinterest have been especially helpful. One reason why we'll never have to haul boxes of magazine clippings around again (aside from the probability that we won't be moving anywhere) is that all the inspiring images I used to collect are now neatly housed on some sixty boards sorted into terribly clever and artful categories, able to be consulted on any whim.

That is, at least, until the EMP hits and I spend the rest of my life regretting having tipped all those interesting, inspiring old articles into the recycle bin during the latest spasm of Death Cleaning.

Image note: All of the Country Living issues during the first sort-through. The cat tried to keep me company on the table, but soon left in disgust, all of the bare spots having been taken up by magazines. Taken on the iPhone.

Posted by Owlfarmer at 1:35 PM