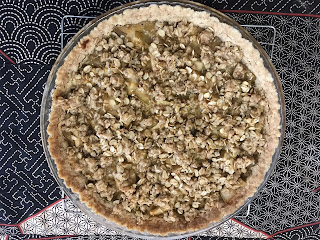 Because my attention span is pretty limited these days, my posts are generally confined to The Farm. I keep promising to keep the Cabinet up and running, but am seldom successful.

This year, however, I've vowed to channel some of my current optimism into more concerted efforts at posting on both blogs, confining my rants on political economy and garden angst to The Farm, and explorations of a more ephemeral nature to this space. And what, to a pie lover, could be more ephemeral than pie? And yes, I know that Pi Day was yesterday (3.14), but I was so knackered after baking the pie that I didn't have enough steam left for blogging about it.

But of course there's a story, so here it is. A couple of months ago, I received word from my longtime e-mail provider, a former student who runs a business that manages such things, that he was moving to a Microsoft 365 platform and changes would have to be made. But since I don't know from Microsoft almost anything (despite the fact that My Son The Game Guy works for the company), I decided to cut and run. I laboriously moved all my contacts over to gmail, and copied volumes of letters to and from family and friends. This was not an entirely unenjoyable effort, because I was able to skim quite a number of letters that brought back memories of the last twenty years. There's further work to do, such as sorting letters by person, and extracting each correspondent from his or her spot in a much larger file to a more manageable one.

Among those whose letters I most value is my uncle Art. He is my father's youngest brother, and the only one of my paternal grandparents' children still living. At nearly 87, he's the family patriarch, and because of good clean living, a terrific sense of humor, a fabulous wife and family, and his mother's longevity genes, I hope he'll hold that title for at least another twenty years.

When I began blogging in 2007, Art started letting me know what he thought about what I was writing, and one project I look forward to is going back through those letters and compiling them with my responses and the posts to which they're related.  Of course, I'll have to live another thirty years or so to get all that done, because both sides of my family have been copious correspondents, and both my grandmother and I saved one another's letters (for about forty years). There are also smaller collections of WWII war-correspondence, and substantial number letters from my father to me when we weren't together.

And then there's the mass of email correspondence that began when both my father and I started using it around 1997, and continued until his death in 2004. I didn't start blogging until 2007, but not long afterward I started getting Art's responses--not attached to the posts themselves, but in e-mails. I hope he won't live to regret having sent them, but I will enjoy going back through them and revisiting whatever I wrote that caught his attention.

One of the things we especially enjoyed chatting about is family history, on which I wrote quite a bit in the early years of The Farm; I also included posts on recipes and other "collectables" here on the Cabinet, which is why I've popped this one in here.

In September of 2008, I wrote about having A Surfeit of Pears, and Art replied with a recipe. I hadn't thought about it in years, but after rediscovering it I decided that I'd make one for Pi Day, which I celebrate every year by feeding The Beloved Spouse something round. And pie-like. I've been doing this since about 2011, when I wrote about the connection in an old blog I devoted to students, The Owls' Parliament (Geometry, Art, Pi, and Pie)

The result is pictured above, and the recipe (and Art's comment) appears below.

OK so you got pears. Try this one you won't regret.

He also noted that it was okay to do what he often did--pick up a deep-dish crust at the market--but since I'm still avoiding the Texas nincompoops and don't have a ready source of decent pre-made crusts, I made my own, from a recipe I've used for years: Anna Thomas's Sweet Pastry Brisée from The Vegetarian Epicure (Random House Vintage, 1972, p. 286):

The ingredients get mushed up together and then pressed into a 10-inch pie pan. Mine is about 1 1/2 in. high, so I press it up to the top edge but don't do anything fancy to it. I am not a great baker, and use shortcrust pastry whenever I make a pie because it's pretty much foolproof--even if it isn't any easier to make than a roll-out dough.

I did have to make some substitutions, because I didn't have any sour cream, so I used full-fat plain yogurt. I only had turbinado sugar, so use it for both crust and pie. I also used about 1/3 c. of oats with 1/3 c. of flour for the crumb top, because that's how I usually top fruit crumbles and betties, and it adds some texture for photos. Also, I used three 9.5 oz Anjou pears, but more would have been okay. I didn't skin them, and cut them in quarters, then slices about 1/4 " thick.

The result was so good that even TBS, who generally is not fond of sweet things, not only enjoyed the warm version we had for dessert last night, but had some for lunch today as well.

Pie always makes me happy, and now that I'm fully vaccinated, and TBS is halfway there, things are looking up. The weather is lovely, Spring is on its way, and although I'm not fond of the change from CST to CDT, I do enjoy having more light at the end of the day.

Posted by Owlfarmer at 1:58 PM