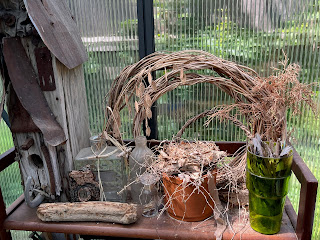 Just when I think that it's finally time to retire the Cabinet, something inspires me to keep it going. This time it was the dual decision to clean up my little greenhouse and to begin to sort through some of the detritus in our shed (and, eventually, as part of the ongoing Swedish Death Cleaning project, the garage). It occurred to me that some of the stuff we've gathered over the years, throughout our lives and travels, is kind of interesting. This could all result in a personal Gesamtkunstwerk. Or if not something so grand, at least my own Wunderkammer.
Almost by accident, but not entirely, much of this accumulation has ended up in the wonderful little polycarb greenhouse The Beloved Spouse erected for me back in early November of 2020. Visitors to Owl's Farm have glimpsed it occasionally (as on Earth Day of this year), but I've never really given it the attention it deserves. Things get plonked down in there willy nilly, and only sometimes somewhat artfully (as above).
Since its inception, this little structure has seen us through two winters (including the one marked by Snowmageddon in February of 2021), and has ended up housing the various bits of geological, biological, and cultural memorabilia collected on two trips out west, and several visits to more local destinations in several Texas state parks and Corps of Engineers campgrounds.
So now I think it's time to let the combined inspirations of Rosamund Purcell and William Buckminster guide my creative juices and turn the as-yet unnamed greenhouse/potting shed/spider and anole habitat into something worthy of its simple structure and basic usefulness. The only thing it's not really good for is being a greenhouse. Our winters are becoming increasingly cold, and we haven't figured out an earth-friendly way to heat it. It's also too efficient at producing solar heat during the day support seed-starting. Only a couple of the plants we harbored in it over winter survived (and they would have done had we simply left them alone out of doors). At the moment we're leaving it open all day and all night because temperatures approach 150F by noon and don't cool off until very early in the morning (with both of its vents wide open).
This project will take some time, so here is some homework if 1) anybody's still reading this blog and 2) you're at all interested in my inspirations.
Rosamond Purcell is a photographer and artist who has published several books of her work and has collaborated with the late paleontologist and geologist Stephen Jay Gould on three books that illustrate the relationship between art and science. William Buckminster was the owner of a seven-acre mass of discarded who-knows-what near Owls Head, Maine, that Purcell frequently visited--and from which she excavated materials for some of the most idiosyncratic and creative works imaginable. I came upon her work early in my teaching career, and mined her creative output as exemplars to inspire my many art and design students. Long before "upcycling" became a "thing," Purcell was using found objects and finds from Owls Head (and museum collections and other sources) to create multimedia works. So for those of who unfamiliar with her accomplishments, here are some recommendations:
Crossing Over: Where Art and Science Meet, by Stephen Jay Gould and Rosamond Wolff Purcell. (2000) New York: Three Rivers Press. Essays by Gould, illustrations by Purcell. (This is the Google Books page.)
Owls Head: On the Nature of Lost Things, by Rosamond Purcell. (2003) New York: Quantuck Lane Press (The link is to a 2004 Fresh Air interview on NPR conducted by Terry Gross; the images don't work any more, but the discussion is terrific.)
Bookworm, by Rosamond Purcell. (2006) New York: Quantuck Lane Press. (The link is to a blog post by Curtis Faville, with some useful commentary and lots of nice pictures.)
More on this project will follow soon.
Posted by Owlfarmer at 3:15 PM