The idea for this blog actually came to me in a dream. I was contemplating the fact that many of the topics I wanted to consider on the Farm had nothing really to do with utopia or William Morris--as much as both occupy my intellectual life. I realized that it might be a good idea to find somewhere else to build a sort of salon: a place to explore and discuss ideas, events, or objects not necessarily related to anything else, or even to one another.

Hence this new blog. I've had so much fun on the Farm, that another, supplementary venue seems only natural. Here there be dragons: and museums and collections and assemblages and all manner of gatherings. It took me a while to come up with a title, because all my initial choices were already in use (I guess I'm not quite as original a thinker as I fancy myself to be). But this is a Wunderkammer of sorts, and so I thought it fitting that I join the ranks of my favorite bloggers with my own contributions to the genre, stamping it with my own "name."

My father discovered many years ago, and much to the family's amusement, that our surname had once been spelled "Ohlemeyer," which, in German, means "Owl Farmer." I immediately adopted it for an avatar, and have gleefully used it ever since for my course pages, and now the two blogs. The fact that owls catch and digest small critters and then spit them out in the form of fuzzy pellets filled with tiny bones is strangely apt. Feel free to think of this blog as being a series of fuzzy pellets filled with tiny gems of interesting (I hope) materials. 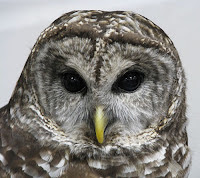 North Texas, where I live, is home to large numbers of raptors, including owls. In fact, a murder of barred owls (I know, crows come in "murders," but I couldn't resist) lives in our neighborhood, and during the spring we are regaled most nights by the hoots and screeches of sex-crazed males vying for territory. At times, one can walk out the back door at dusk and be swooped over by large, heavy birds who've been roosting on the house-eaves. One evening earlier this year, we listened as our dog Arlo, a basset-border collie mix, accomplished an astoundingly accurate imitation of the barred owl who sat twenty feet above him, hooting away in a pecan tree.

So it does seem appropriate to use this blog as a way of focusing on the idea of collection, of hunting and gathering (for which we are clearly genetically programmed, although not always in a productive way), and the human tendency to conduct archaeological explorations of everything from lost civilizations to ideas. The possibilities at this point seem endless.

Photo credit: A Barred Owl Rescued after an Accident, T. J. Peterson, Wikimedia Commons.
Posted by Owlfarmer at 8:03 AM