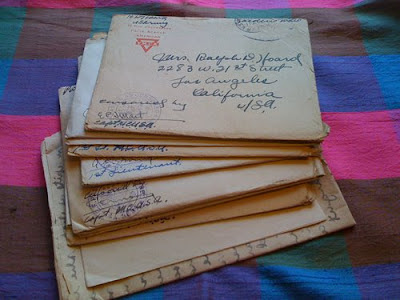 One of the truly fortunate aspects of being bred from a variety of the species Neotoma cinerea (Bushy-tailed Woodrat, better known as "packrat") is that I've inherited hoards of letters. Or, more aptly put, letters of Hoards.

My maternal grandfather, Ralph Disbrow Hoard, married my grandmother, Dorothy Minneola Crumley, shortly before he shipped out to France during World War I. Apparently because his eyesight was too poor for battle purposes, he spent the war as a medic; the experience is probably what prompted him to become an osteopath, because by the 1920 census he's listed as a medical student. I found a biography online from Merced County, California, that notes his marriage on November 29, 1917, and the fact that he spent a year in France. Even though they were married before the war, however, they seem not to have lived together until after he finished medical school--judging from their separate entries in the census taken in Pasadena.

My newest project is to sort, arrange, and read through a box of letters he wrote to my grandmother during his enlistment, many of them from France toward the end and after the war. A brief sortie into the stack and a half-hearted attempt to put them in chronological order prompted me to read through a couple of them--only to find out that my sarcastic streak is probably genetic:

Dearest Dottums. Oh yay, how my arm aches. Merle and I got our shot in the arm today. They are using the new lipovaccine. It has an oil medium and, oh boy, the kick we're getting out of it.

The vaccination was probably for pneumonia. He says later (April 8), after thanking "Dottums" (I knew her as "Gramie Dottie") for some pictures she had sent of the family cottage at Balboa,

I do believe you're better looking now than when I left. If such is the case, I guess I had better stay over here, not (the "not" is underlined three times). 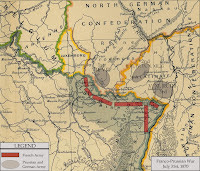 I thought this locution was specific to twenty-first century teenagers, but obviously it's made the rounds before. He goes on to mention a motorbike trip (he had been a mechanic, so one of his war jobs was apparently with the motor pool) to some of the central sites of the Franco-Prussian War in 1870 [click on the map for a larger version], and talks about visiting the museum at Gravelotte--which is quite near Mars la Tour (site of one of the major battles of the war), where he was billeted:

. . . I went through the military museum and it certainly was wonderful. All kinds of uniforms, guns, swords, shrapnel, shells, bayonets, breastplates, helmets, etc., of both German and French. Then there are a great many paintings of that war. Oh, I tell you it was great and I wouldn't trade that trip for a trip through Field's museum.

I'm assuming he's talking about the Field Museum in Chicago, which he probably visited en route to the East Coast for transport to the front. See? Even the museum bug is in the blood.

It seems fitting on Mother's Day to spend a bit of time getting to know my forebears better. I remember both my grandfather and my grandmother as remarkable people, and their early devotion to one another (although they later divorced) is quite poignant. She clearly wrote to him regularly throughout his stint, and he was equally faithful in his replies. I only wish I had the other half of the correspondence.

Photos: Part of the stack of war letters; Map of the Franco-Prussian War 1870, from the Cambridge Modern History Atlas of 1912 (Wikipedia commons)

Posted by Owlfarmer at 9:20 AM